Why We Calibrate Pressure and Temperature Transmitters

Like all markets, the oil and gas industry has buyers and sellers. Buyers want to make sure they are getting what they pay for and sellers want to ensure they are getting paid for what they are providing. But how does each party know exactly what is changing hands when the commodity is something that is difficult to isolate and measure --like a gas? How can each party feel good about the transaction if they can't see or weigh the goods that are being sold?

In the oil and gas industry, pressure and temperature transmitters are the cash registers on the pipeline. By measuring temperature, pipeline pressure and the pressure drop across a restriction in the pipeline, (called an orifice plate) we can infer the flow of oil or gas going through the pipe at any given time. When you can accurately measure flow, the buyer and seller of the oil or gas each know, with a high degree of certainty, that they are getting a fair deal. Because this flow measurement is what establishes prices, it is imperative that both of these measurements are very accurate so a fair price can be set.

To guard against an incorrect measurement of any kind, technicians routinely calibrate the pressure and temperature transmitters. This calibration ensures that the variables being used to determine the flow are accurate. 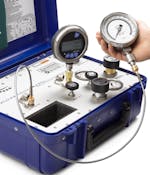 How a Calibration is Done

If the pressure displayed on the DUT is the same or within a certain accepted range of the reference then the DUT is considered to be within specifications. This test is called an “As Found” test. If the DUT falls outside this tolerance band then the DUT must be adjusted or calibrated until it reads the same at each pressure as the reference device. After it is calibrated the test sequence is repeated until the device is considered in tolerance. This is called an “As Left” test. After the tests are complete a certificate is produced or the data is recorded in case it is ever needed for audit purposes.